For those of you who are fans of turn of the 20th Century adventure novels, or have seen the film adaptation starring Errol Flynn and Olivia DeHavilland, you know that Captain Blood is a story about the bad old days of England when James II sat on the throne. 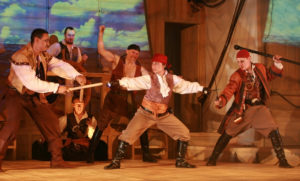 Early in his reign James faced two rebellions and it was the second one, Monmouth’s Rebellion, that resulted in the transportation of many of the rebels to the West Indies and forms half of the true historical basis for Captain Blood. The other half being a colorful Irish Rebel, Thomas Blood, who after being deprived of his lands in the British Civil War, attempted to steal the crown jewels from the Tower of London. He was caught, but so charmed King Charles II that he was pardoned and his lands returned.  These two things sparked Sabatini’s tale.

And what a tale it is.  After he is unjustly transported for giving aid to Monmouth’s rebels, Dr. Peter Blood, ably played by the intellectual Nick Sandys in First Folio’s adaptation, along with many others caught up in the rebellion, is sold to Miss Arabella Bishop, Heather Crisler.  Arabella stands to inherit the greatest plantation on Barbados, and get out from under the thumb of her sadistic Uncle, Colonel Bishop, the incredible Aaron Christensen.  But Blood’s skill as a physician brings him to the attention of the Governor of the island and he treats his gout and earns many privileges.

Blood becomes smitten by Miss Bishop, which, though they are given very clever lines by Jeff Award-winning playwright David Rice, you just don’t believe for a minute.  You continue to not believe it even when they kiss later in the production.  There’s just no spark between Sandys and Crisler and it is the one weakness in this production.  But both are able swashbucklers, so you don’t really mind if the romance is lacking.

Blood also befriends fellow prisoners including Nathaniel Hagthorpe – Kevin McKillip, sporting a perfect West Country pirate accent and stealing every scene he’s in; Wolverston, Christopher W. Jones, bringing a touch of Island flair; and Ogle, the able Jaq Siefert, who act as a Pirate chorus and keep the audience abreast of all the plot developments in a charming and entertaining fashion. They also have Jeremy Pitt (the excellent Austin England), a ship’s navigator and Colonel Bishop’s favorite whipping boy.

When the Spanish attack Bridgetown, Blood and his crew take over the Spanish ship and sail off to become pirates, like you do because, why not, really?  Colonel Bishop vows revenge.

Blood’s pirate career goes swimmingly and there’s a surprising amount of action that is excellently conveyed by actors flinging themselves hither and thither in the high seas and with projections on various parts of the sets. They even do really cool sea battles.

When they match guns and wits with the Spanish, Kevin McKillip does double duty as the extremely effete Don Alan de Panadero and is even more hilarious here then he is as Hagthorpe, with a fun Spanish accent. There are quick changes between the two characters that it’s hard to see how he manages.  A number of other actors, notably Austin England, Aaron Christensen and Almanya Narula manage multiple roles as well, all superbly.  Sam Krey makes an impression as Lord Julian Willoughby who ultimately brings Blood his pardon.

The fight choreography by Nick Sandys is also remarkably good.  The movement in this play is some of the best I’ve seen in Chicagoland and kudos for making foil fencing look dangerous and interesting.

And there are pirate songs.  Pirate songs which work and are fun written by playwright David Rice (lyrics) and Christopher Kriz (music), who also did Sound Design.  Director Janice L. Blixt did a lovely job with this, making it fun, lighthearted and thrilling by turns.  The Scenic Design by Angela Weber Miller is also wonderful, allowing all the on-sea action to be realistic.

This production is at First Folio Theatre (Mayslake Peabody Estate, 31st St. & Rt. 83) running through February 26, 2017.  You should go at once before it sails away.

October 30, 2018 Suzanne Magnuson Entertainment 0
Spread the love
Spread the loveBased on real-life Master Classes La Divina taught at Julliard in 1971 and 1972, Terrance McNally’s Tony and Drama Desk Award-Winning play is a fictionalized account that gives a basic structure that allows […]

The Food Show Review – Something Fresh to Chew On

August 2, 2017 Jessie Bond Entertainment 0
Spread the love
Spread the loveThe culture of food, both in its macro and micro forms, so permeates our daily lives that it is nearly invisible. That is, unless you’re sitting in the audience of The Food Show, […]

August 1, 2017 Jessie Bond Entertainment 0
Spread the love
Spread the loveThe riot grrrl movement of the 1990s is hardly familiar territory for contemporary teenagers and young adults; modern social justice movements have taken on a different shape and focus than this punk rock, […]